The Tavern, a historic building, circa 1780-1830, was restored to replicate its original architecture several years ago. The club maintains the landscaping of woody, perennial, annual plants, shrubs and spring daffodils. We decorate with our garden greens and dried arrangements during the Holidays.

The Kitchen Garden was planted last year and catches the eyes of those who attend meetings and community events there. Information about the history of kitchen gardens is available to attendees at the Museum. The aromatic herbs and lovely flowers inspire interest about the who, whats and whys of the History of Kitchen Gardens.

The Kitchen Garden Handout to public: Countryside members tend and maintain the kitchen garden for the public to enjoy during the Spring, Summer, and Fall. We encourage individuals visiting the Tavern to snip a few herbs while they are there. Dried okra from our garden was used in a fall wreath assembled by the Delaware Center for Horticulture and featured in the 2019 Delaware Today magazine. Members have used the okra in their arrangements, as well. Lavender and hops can be gathered to use make Herbs de Provence for cooking – a mixture of several herbs for use in your stews, meats, fish and vegetables.

In keeping with the tradition of history, an American Holly was planted in front of the Exhibit Museum.

American Hollies served the Native Americans with wood for different applications and berries used for buttons and barter. The first scientific observation of this holly was seen and recorded in 1744.

**Information on the Holly will be added to our Handout to the public. (It has currently been closed due to Covid-19). Our partnership with Tweed’s has increased our learning of the community’s history.

Thanks to Joe Lake, President of the Hockessin Historical Society and Darleen Amobi, Museum Director, we can now tie our town’s past and its culture with kitchen gardens and our new American Holly!

**The following is a list of some herbs being used for the Colonial garden that will be published in the pamphlets to educate our public.

Parsley (Petroselinum crispy), in Colonial times, seasoned foods (not garnished foods as it does today) and was a health tonic. Parsley was used as a dye, producing a green color.

Rosemary (Rosmarinus officinalis) seasons lamb, game, and stew dishes and was grown as a culinary herb. It was known as an herb of remembrance, added to wedding cakes or pudding.

Dill (Anethum graveolens) is grown to flavor stews and pickles, and also for its healthful properties. It was used by Colonial Americans as a soothing herb and to treat hiccups.

Chamomile (Matricaria chamomilla) flowers were brewed into a tea to treat stomach complains and help with cold and aches. A sugary syrup made with the flowers was thought to treat jaundice and dropsy.

These plants and some flowers used by Colonial Americans were located outside the kitch kitchen door for use in the kitchen and medicinal purposes. The committee has much work to do before the planting! 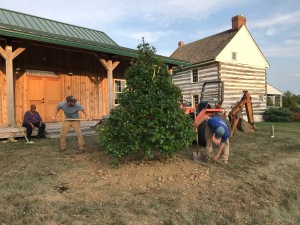